Back 4 Blood is an exciting co-op first-person shooter from the creators of the acclaimed Left 4 Dead series. You are at the center of the war against Ridden.

These once-human, terrifying creatures are about to devour the last vestige of civilization because of a deadly parasite they carry. With mankind’s very existence at stake, it’s up to you and your friends to eliminate Ridden and regain control of the world. 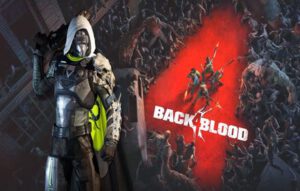 You must work together to survive as you struggle through an ever-changing, terrifying world with increasingly difficult missions with a 4-player co-op story. Play with up to 3 friends or lead your team in solo battle.

Choose from 8 immune, customizable Cleaners and a wide range of deadly weapons and items. Develop your strategy against increasingly powerful creatures that are trying to bring about their ultimate end.

Play with or against your friends in PVP battles. Play as a Cleaner with special abilities or a fearsome Ridden. Each side has their own unique weapons, skills and characteristics.

A brand new “rogue-lite” Card System that allows you to create customized decks and tackle tougher battles with different formations.

Exciting missions, extraordinary gameplay variety and powerful Ridden troops, including mutated 7-meter bosses, await you, thanks to the Game Manager, which constantly adjusts itself to the player’s actions.
ADULT CONTENT DISCLOSURE
The developers describe the content as follows: